Recent monitoring and research data indicate that there are severe cardiotoxic side effects of drug formulations containing dextropropoxyphene, and overdose can be life-threatening. After the relevant experts from the State Food and Drug Administration organized evaluation and demonstration of the monitoring and research materials at home and abroad, the risk of using the drug in China was greater than the benefit.

The State Food and Drug Administration reminded that dextropropoxyphene is an opioid analgesic. Suspension of patients who have used the drug for a long time may cause discontinuation of the drug. It is necessary to gradually reduce the drug withdrawal and take appropriate alternative treatment measures. From the day the notification is issued until July 31, 2011, patients who are being treated with a pharmaceutical formulation containing right propoxyphene should consult a prescription doctor and complete the withdrawal process under the guidance of a doctor.

The State Food and Drug Administration requires that, first, as of July 31, 2011, pharmaceutical production, operation, and use units should stop production, sales, and use of pharmaceutical preparations containing dextropropoxyphene and recover the drugs that have already been listed. Second, pharmaceutical production enterprises should formulate plans for withdrawal of market work, actively assist physicians and patients in reducing the amount of drug withdrawal, adopt appropriate alternative treatment measures, strengthen the monitoring of adverse reactions during drug withdrawal, and ensure that doctors and Patients can obtain drug formulations containing dextropropoxyphene. Pharmaceutical production enterprises should report the implementation plan for the withdrawal of their products to the provincial Food and Drug Administration before January 31, 2011, and submit a summary report after the completion of the withdrawal. Thirdly, the drug regulatory authorities at all levels must immediately notify the relevant units of the production, operation, and use of relevant drugs within the jurisdiction of the drug regulatory authority, and be responsible for the implementation of the relevant work supervision within the jurisdiction.

1. What measures is taken by the State Food and Drug Administration for right oxyprofen?

Recently, monitoring and research data indicate that there are severe cardiotoxic side effects of pharmaceutical preparations containing dextropropoxyphene, and overdose can be life-threatening. The State Food and Drug Administration organized relevant experts to evaluate and demonstrate the monitoring and research materials at home and abroad, and believed that the risk of using the drug in China was greater than the benefit. In order to ensure the safety of public drug use, the State Food and Drug Administration decided to withdraw pharmaceutical preparations containing dextropropoxide from the Chinese market in accordance with the "Drug Administration Law" and the "Regulations for the Implementation of the Drug Administration Law."

2. What is right propoxyphene? How is the listing situation in China?

Right propoxyphene is an opioid analgesic that was marketed abroad in the 1950s and 1960s for the treatment of mild to moderate pain. The drug has a single preparation, there are compound preparations, the main clinical use of right-oxygen-oxygen compound preparations. Dosage forms include tablets, capsules, injections, and the like.

Propofol tablets are compound preparations of dextropropoxyphene and acetaminophen. The trade name is â€œDanningâ€. It is used for the treatment of various moderate to mild cancer pains. It can also treat neuropathic pain and postoperative pain. Vascular headache, bone and joint pain. Propoxypill tablets are compound preparations of dextropropoxyphene and aspirin for alleviating mild to moderate pain with or without fever. Both drugs are administered as prescription drugs in our country.

3. What are the main safety risks of right propoxyphene?

Right propoxyphene has a certain side effect on the heart, and this effect is dose-dependent. The latest research results show that even if used at the dosages recommended in the instructions, right-right propofol can cause clear ECG changes, including prolonged QT interval, widened QRS complexes and prolonged QT interval, and can increase serious or even death. The risk of arrhythmia. Most of the drugs used to treat cancer pain are elderly people, which may have cardiovascular risk factors in themselves and have a higher risk of right oxypropylene use.

Right propoxyphene has a low safety and excess risk. The drug has a narrow therapeutic window, and excessive use may cause serious toxic reactions such as respiratory depression, blood pressure drop, coma, etc., and the occurrence of toxic reactions occurs rapidly, and patients may die due to untimely treatment. Statistical analysis of deaths in the United Kingdom and other European Union member states shows that the number of deaths due to overdose of the drug due to intentional or negligent results has increased significantly.

4. Why did China take measures to withdraw the market?

The safety of dextropropoxyphene, especially the safety of overuse, has been the concern of the drug regulatory authorities in various countries. In 2007, the State Food and Drug Administration organized the Drug Evaluation Center and the Drug Abuse Monitoring Center to evaluate the risk of right-drug propofol use in China. At that time, Chinaâ€™s monitoring data showed that the adverse reactions and drug abuse cases associated with dextropropoxyphene and its compound preparations were only cases. No drug overdose, fatalities, and drug abuse incidents were found. To ensure the safety of medication, the State Food and Drug Administration The Authority strengthened the safety monitoring and risk control of the product. At the same time, the State Food and Drug Administration and drug manufacturers have conducted risk exchanges, require drug manufacturers to revise their product specifications, add warnings to the instructions, require strict adherence to recommended doses, and use caution or disable them at certain high risks. crowd.

Recently, the National Bureau once again organized the evaluation of right propoxyphene. Based on the combination of domestic and foreign monitoring and research materials and domestic clinical expert opinion, the State Bureau decided to withdraw the drug containing dextropropoxyphene in China. The withdrawal will be carried out in stages, so that those patients who are using the drug can have Sufficient time to switch other medications.

5. What is the impact on the treatment of patients in China after withdrawal of right propofol?

Right propoxyphene does not have a significant effect compared to other analgesics. At the same dose, dextropropoxyphene has less analgesic effects than opioids such as morphine and codeine. The therapeutic effects for mild to moderate pain did not exceed that of non-steroidal anti-inflammatory drugs such as acetaminophen and ibuprofen.

6. Why did the right propoxyphene withdrawal from the city establish a transitional period?

According to the requirements of the drug product specification, the right propoxyphene compound formulation should not be taken long-term and continuously. According to the instructions of the instructions, medication, patients generally do not appear obvious drug withdrawal symptoms, but if long-term, continuous, high-dose medication, there may be withdrawal syndrome, such patients should consult a doctor, and gradually reduce the withdrawal. Therefore, the decision of the State Food and Drug Administration to gradually withdraw the market allows patients to successfully stop the drug within a certain period of time, and gradually transition to other alternative medicines to ensure the safety of patients.

7. What are the suggestions for medical staff and patients during the transitional period?

It is recommended that doctors do not prescribe right-propoxyphene compound preparations for new patients during the transitional period; patients who are currently using the drug should consult doctors promptly and consult doctors for plans to discontinue treatment and replace drug treatment.

Before replacing other medications, if the patient needs to continue medication, the patient should be closely monitored and an abnormal condition should be treated immediately. The use of this drug in combination with alcohol can reduce the threshold of its toxic reaction. Therefore, drinking alcohol or using other alcoholic drugs or drinks is prohibited during drug use. Co-administration with other CNS drugs (such as sedatives and antidepressants) may produce synergies and increase the risk of adverse reactions. During the use of the drug, try to use the lowest dose and the shortest course of treatment that can achieve analgesia, and do not use overdose.

8. What measures should the company take to cooperate with the State Food and Drug Administration to take the withdrawal action?

During the transitional period of withdrawal from the market, relevant companies should strictly control the flow and quantity of drugs containing dextropropoxyphene already on the market, and report to the drug regulatory authorities on a regular basis; continue to monitor the adverse reactions of the drug, and The patient actively contacted and informed the State Food and Drug Administration of the processing decisions and related information to ensure that patients in need were able to obtain the drugs in order to successfully complete the conversion treatment of the drugs. Since July 31, 2011, related companies should stop the production and sales of pharmaceutical preparations containing dextropropoxyphene and recover the drugs that have already been marketed.

9. What are the assessment conclusions and measures taken by the United Kingdom and the European Union?

In June 2009, the European Medicines Agency evaluated the drug in the European Union. The Committee of Experts believes that the existing evidence cannot prove that dextropropoxyphene is more effective than other alternative analgesics, but evidence suggests that the number of deaths caused by excessive use of the drug is significantly increased. The committee concluded that the risk of right dex propoxyphene, especially the risk of death caused by excessive use (intentionally or negligently), is greater than its therapeutic benefit. It is recommended that dextropropoxyphene and its compound preparations be gradually withdrawn from the EU market.

10. What are the conclusions of the United States assessment and the measures taken?

The U.S. Food and Drug Administration (FDA) also organized experts to evaluate the safety and efficacy of dextropropoxyphene. In July 2009, the FDA issued information that allowed right-oxyprofen to remain in the market, but required a black box warning in the description to emphasize the risk of overuse. At the same time, the FDA requires pharmaceutical companies to conduct a new study to clarify the toxic side effects of dextropropoxyphene. New research data shows that the use of right dex propoxyphene raises the risk of severe or even fatal arrhythmias in patients. Accordingly, in November 2010, the FDA also made a decision to withdraw right oxyprofen.

Fuji apple is mainly produced in shandong province. Fuji apple has smooth skin and good color, full fruit juice, sweet and refreshing taste.New harvest season for Fuji apples from September to October.The cold storage season is from October to June next year.Fuji apple mainly exports to southeast Asia, the Middle East, Europe, Russia and North America.Apple packaging includes both inside and outside packaging.Inside packing: paper tray, apple net, plastic bag or sleeve.The outer packing is 3kg CTN, 4kg CTN, 9kg ct, 10kg CTN, 16kg CTN, 18kg CTN or 20kg CTN or as required by the customer.All sizes are graded according to your requirements.When packaged in all sizes in natural proportions, all sizes come in full blush and striped red, and Fuji apples are the best and most competitive in the entire market at fresh prices.Our Fuji apple prices will be to your satisfaction. 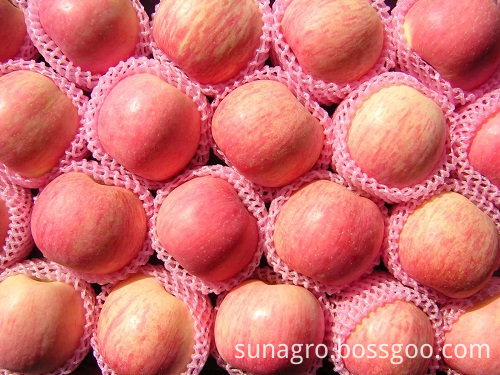